Ice-making plant: A solution to the ice demand and supply in Sagay City, Negros Occidental 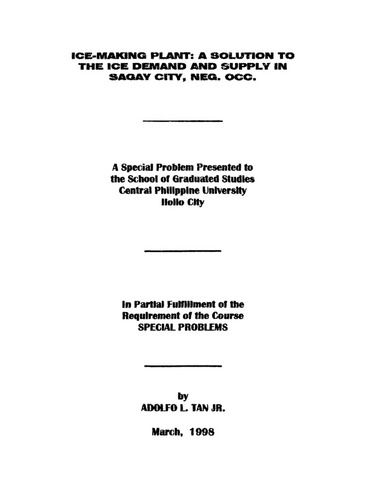 Refrigeration industry began as soon as man began to preserve his food. It grew up with civilization as man's needs for preservation increased. A practical problem arose out in the newly inducted City of Sagay (formerly municipality of Sagay) that there is a need for an ice-making plant to supply the increasing demand of the different sectors in the city. During the recent survey, it was shown that there was a lack of ice supply with the three different sectors, namely: the agroindustrial sector, commercial sector and the household sector. The agro-industrial sector consists mainly of fishing industry. It is a regular consumer of ice which avails it in bulk or in greater volume. According to the Bureau of Fisheries, there are 2,033.82 hectares of bangus culture in this city which is having 1,283.4 metric tons per year production as of 1997 (see Table 1 of Chapter Three). By average, one ton of fish needs two tons of ice from harvest to delivery. However, producers use an average of 1.5 tons of ice per ton of fish for economic reasons. In offshore fishing an average of 3,247 metric tons is produced yearly for a motorized boat and about 675 metric tons is produced yearly for a non-motorized boat (see Table 2 of Chapter Three). In the commercial and household sector, ice consumption is increasing due to the fact that commercial establishments are also increasing in number. According to the surveys conducted, an average of 30 kg. of ice is used per day for these establishments, about 24 kg. of ice is consumed daily for ice cream vendors and about 20 kg. for the daily consumption of ice scramble vendors (see Table 3 of Chapter Three). Household sector is the least consumer of ice. Ice consumption in this sector is affected by seasonal factor such as the dry season, beginning December to May, demand for ice is high, peaking in the month of March and April. In the neighboring towns and municipalities of the city, people had been greatly affected by the economic situation particularly that of the fishing industry. People are deprived to invest their time and money, admitting imminent loss on their investment even though with the existing ice and cold storage plant in Bacolod City and Cadiz City. Because of the increase in demand, people are not contented with the presence of existing plant. There should be an additional establishment of ice and cold storage plant to overcome the tremendous growth in the fishing industry of the nearby towns. Now, if the fishing industry is to perform into a progressive one, there must be enough access to fish preservation to avoid increase of fish spoilage which causes the cut-down of the development of the fishing industry and the province as a whole. As a result, there must be an additional establishment of ice plant, as well as future expansion should be properly emphasized. This plant therefore is to help economic growth particularly in agro-industrial, commercial and household sectors in the city and around the area of the nearby towns. Statement of the problem It is the purpose of this study to establish an Ice-making Plant (50-ton capacity) in Sagay City for the year 1998 when the demands are taken as a whole and when grouped according to selected variables. More specifically, this study is aimed to accomplish the following problem objectives: A. Data for agro-industrial sector which constitutes a greater market consumers were mostly derived from the Bureau of Fisheries and Aquatic Resources in the province of Negros Occidental in the year 1997. B. Surveys and estimates were conducted at random but were seen to it that these present the majority of the people C. All other items that could not be estimated realistically were assumed to give optimum results.