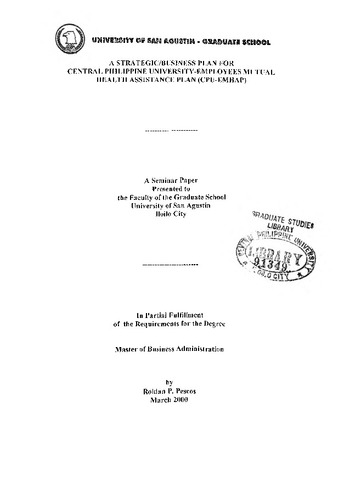 Central Philippine University-Employees Mutual Health Assistance Plan (CPU-EMHAP) is a health maintenance organization established by Central Philippine University-Faculty Association (CPU-FA). It is a special project to deliver health care service facilities exclusively for the CPU employees and their families. It started its operation on July 21, 1993 with 197 enrollees. CPU-EMHAP was created in response to the high cost of health care insurance and unsatisfactory services by previous health care companies. It was designed to meet the following objectives: low cost contribution, prompt delivery of service facilities, improve health care benefits, and additional earnings for CPU-FA. During the first two years of its operation, CPU-EMHAP earned net incomes of 41.95% and 63.18% respectively of its gross revenues. However, the net incomes went down tremendously on its third year and fourth year with 4.14% and 5.26% respectively of its gross revenues. The situation worsened during its fifth year of operation when it suffered a net loss of 21.23%. This predicament was primarily caused by poor accounting system, meager compensation of personnel and laxity in policy implementation. Further, it was realized that the outbreak of dengue epidemic, inflation and the fact that CPU- EMHAP has no legal personality as an organization have aggravated the situation. The mere preparation of this seminar paper has already proven its usefulness to CPU-EMHAP. When the study started last fiscal year 1998-99, some problems were identified and immediate remedies were applied. As a result, CPU-EMHAP has regained its financial strength by earning a net income of 23.70% on its gross revenue on that same fiscal year. At present, CPU-EMHAP is the leading group health care provider in CPU and is expected to expand its market through the aid of this study which is designed to improve its operation by strengthening its financial condition and its strategies in services, leadership and performance, as well as, to consider the possibility of transforming it into a service cooperative in order to have a legal personality and enjoy other benefits. This study entails specific strategy where the organization’s objective in improving service facilities and performance will be attained for the satisfaction of its members. It implies and makes use of its available resources to explore its differential market advantages over its competitors and to ensure a privileged and assured customer acceptance in serving its domain. The study has outlined its strategic thrust, thoroughly planned its implementation for the attainment of its specific targets which will ultimately extract an improved financial performance and services. This study also provides a five-year Action Plan for implementation on the basis of the compiled survey outputs and the objectives of CPU-EMHAP to meet the member satisfaction and the attainment of its targets.