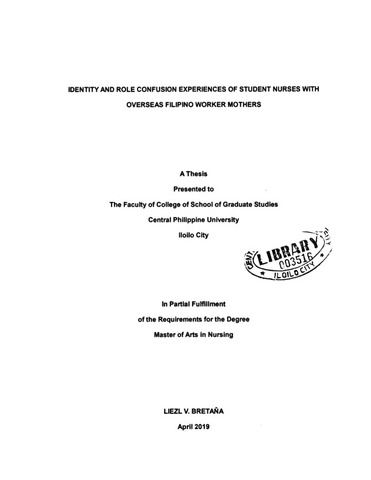 This phenomenological study aimed to explore the identity and role confusion experiences of female student nurses whose mothers are overseas Filipino workers. Erik Erikson’s (1970) Psychosocial Developmental Theory posits that identity and role confusion is an important accomplishment in the development of a person. Later psychologists believed that orientation about one’s environment, parental and caregiver influences during the growing years greatly affect this significant milestone (Miller, 2011, Penuel & Wertsch, 1995). In this study, the participants were chosen purposively and saturation principles were applied in data collection which used in-depth interview. All interviews were audio-taped, transcribed and translated into English by the researcher. Data were analyzed using Colazzi's descriptive phenomenological strategy. A computerized qualitative data management program was also utilized to categorize and discern patterns. From the participants’ interviews their lived experiences on identity and role confusion include (1) Maternal Proxy; (2) Role Reversal; and (3) Challenges with the Identity and Roles; and, (4) Strategies of Coping with Extended Role. These experiences are true only to those who have experienced such phenomenon and cannot be generalized to all student nurses who have undergone identity and role confusions while their mothers are working abroad. The identified themes formed the basis for the formulation of recommendation guidelines on identity and role confusion experiences. It is recommended that guidance counselor may organize a “Self-Help” group that could assist them when feelings of abandonment set in. The student nurses may help themselves by engaging in activities like peer activity or counselling that would continually support them in their challenges. Nurse educators may also take part by developing a tutorial program for those identified student nurses with school difficulties. Lastly, this study may be used as basis for other studies to help us understand more on identity and role confusion experiences that other adolescent are going through.