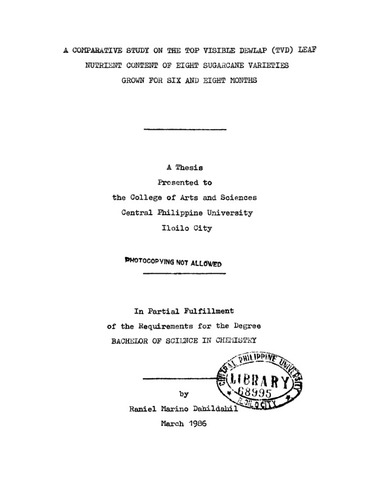 For the past thirty years the Sugar Regulatory Administration, including the defunct Philsugin and Philsucom, have been equipped only to use soil testing as the main basis for fertilizer recommendation. This system of fertilizer recommendation while its utility has been con- firmed by Quilloy, et al in 1983, and has shown its usefulness to the sugar industry in general, could be further strengthened through the use of foliar diagnosis, as practiced in other countries. The Agricultural Experiment Station of the Hawaiian Planters Association for example, is one of the strongholds in the use of soil testing for sugarcane. As an improvement, the station had developed the eight to ten internode system of foliar diagnosis while they still advise soil tests for phosphorous, potassium and calcium before planting the crop. They use foliar diagnosis once the crop is growing. An intensive review of literature on foliar diagnostic tests done in other countries however, showed that cane leaf analysis, if properly done, can be a very useful tool in predicting the nutrient requirement of the cane plant as based on the study of Farguhar and Lee, and Samuels,3 1968. These works, to a certain extent, have also demonstrated that leaf analysis can be a very useful index of the nutrient status of the cane plant. Since tissue analysis is widely used, the standardization and refinement of the technique is important. The objective of this investigation was to determine and compare the concentration of nutrients extracted by the cane plants at ages six and eight months through foliar diagnosis of eight diagnostic tissues using three different chemical analysis procedures. Such varietal differences in foliar diagnosis values have not been fully ascertained under local conditions, hence the study. Object of the Study This study aims to (1) determine the top visible dewlap (TVD) leaf nutrient content of eight sugarcane varieties at ages six and eight months and (2) compare the different varieties on the basis of nutrient uptake.