A study of the results in terms of academic behaviors, of a special program in guidance 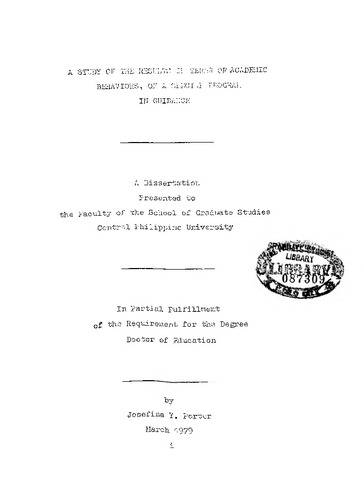 The common aim of all educational institutions, be they elementary schools, secondary schools, colleges or universities, is to help a student to achieve what he comes to school for. This is not an easy accomplishment for institution and/or student to realize, however. There are many factors, both indentifiable and unidentifiable, that seem to hinder many young students from achieving what they are capable of achieving in schools. In fact, underachievement and the lack of motivation to study seem to be the obiquitous though unwanted "results” of educational effort, even of institutions that are most concerned about their students. It is needless to say that underachievement sets back our national development all because the potentials of a great many to produce something of consequence were not recognized while they were in school. It is believed by the researcher that underachievement will continue to adversely affect the work of education in that society will not be able to profit from the investment made on every child placed under its care. That there has been much concern about our underachieving youth is shown by the many studies devoted to the problems of underachievement. In the United States the studies made by Baymur and Patterson in 1960 and by Calhoun2 in 1956 are only a few of the investigations made to date. In the Philippines, some local universities like Central Philippine University have been engaged in projects intended to study the extent of underachievement among high school students. At Central Philippine University a rough survey of failure among the entire high school population, from the freshmen to the seniors of the school year 1975-1974, disclosed distressing facts that pointed up the seriousness of underachievement in this school community. In this survey, fifty-eight per cent of the high school population had failing grades in at least two subjects at the end of the second and third grading periods. Unfortunately, follow-up counseling was not possible because of the lack of trained counselors to handle the work. In the College division of this same institution, a similar survey was made in the same school year. All College deans were requested to submit a list of students who had failures after the mid-term evaluation of achievement. Each college reported at least ten per cent of its total enrolment as either failing or failed. To add to the problem, the counselors of the Guidance and Testing Services were faced with the problem of how to maintain systematic scheduling of interviews when it was not certain whether the students would keep their respective appointments. As though these problems were not enough, the different studies made on achievement are limited in usefulness in that although several of these attempts identified some probable causative factors, there was a lack of report about attempts to use definite methods of attack on underachievement and/or methods to induce high academic achievement. In view of this shortcoming in the campaign against underachievement, experimental studies on ways to eliminate or minimize underachievement are much needed. Such studies to be helpful should state definitely the conditions under which they are to be conducted, and the behaviors to he expected under these conditions. In conformity with this delimiting statement, the present study was an attempt to answer this general question: What are the specific treatment conditions that will effectively induce/motivate students to achieve academic success? Several attempts at helping under-achievers have been listed to date. Some of these include group counseling, individual counseling, reading guidance, supervised study for groups. It was thought that limiting the study to one specific approach or theory, but giving it a treatment with some depth in that its effects on students are ascertained, may be worth a try. As in the case of the above-mentioned studios, the cases to be used in the present ones were to be the students who maybe underachieving because they were not inspired or challenged enough in school. The Problem This study proposed to find out whether the implementation of the general theory of behavior modification through reinforcement embodied in a Special Program would result in better achievement among previously identified high school senior students of Central Philippine University of 1975-1976. The treatment attempted to realize the following objectives. To improve: (1) the subjects' motivation to achieve academically; (2) their study orientation; (3) their grades in the different academic subjects of English Composition, Literature, Physics, Trigonometry, and World History; and (4) their attendance in those aforementioned subjects.