A survey of resources, instructional materials, and methods used in the teaching of Filipino language in the secondary schools of Iloilo 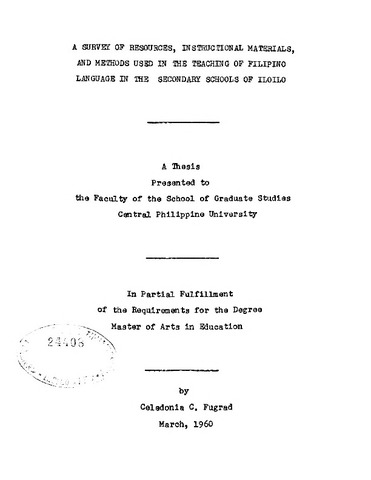 The adoption of Tagalog as the basis of the development of Filipino Language has paved the way to a common language. From the start, the school has been the best media for propagating the language. It has borne the burden of making the language known throughout the country. It is true that the country is divided into many islands and difficulties have been encountered due to many dialects, yet, during the past years there has been seen an awakening of interest in having only one common language. At present from Aparri to Sulu, there are people who can convey ideas through the use of Filipino Language. Filipino Language is the national language of the country. With the advent of the birth of a common language, educators felt that to disseminate the language, the schools should take part actively. Hence, Filipino Language became a part of the school curriculum and, as such, a required subject in both public and private schools throughout the Philippines. The inclusion of Filipino Language in the curriculum was hardly twenty years ago but it has brought about a marked change in the life of the people. In the Philippines, where people are divided by geographical location, different native dialects, beliefs, and mores previously one could find many distinct groupings. People were known according to the dialect they spoke. One was a Pampango, an Ilocano, a Tagalog, a Leteño, a Moro, or a Chabacano, one could hardly hear that he was a Filipino. This was the situation when Filipino Language had not yet been introduced in the schools. One can see the status of Filipino Language in the solidarity of the nation. The educators are unanimous for the inclusion of the language and therefore every school official and teacher should endeavor to overcome whatever problem they might encounter in the field. The present study of the instructional materials, resources, and methods is an attempt to discover what the Iloilo secondary schools are using which can be of help to every teacher in Filipino Language, the place being a representative example of the provinces of the country. Suggestions and recommendations will be made for the improvement of the subject. The Problem Statement of the problem. The propagation of Filipino Language has been beset with difficulties not only at the start but also at present. The problem of how to propagate it is a question and much more is the lack of materials as well as resources to be used in the teaching. This study made an inquiry of what resources, methods, and instructional materials are being used. Filipino Language unlike English which was introduced at the coming of the Americans is still a new subject in the curriculum. Being so, the teachers in this field lack suitable materials to make teaching effective and Interesting. This study was an attempt to find out what books, magazines, newspapers, etc., are used in the Filipino Language classes by the high schools of Iloilo. It sought to discover whether students are making use of the approved instructional materials in Filipino Language, like textbooks, supplementary readers, reference books, courses of study, teachers’ guide, magazines, and newspapers. One of the impediments in the language propagation is the method of teaching used by many teachers. The subject is made too difficult because many teachers are still using the traditional method. Many of them stick to the learning of rules instead of learning from the interest and experiences of the students. Language teaching should be incorporated with thoughts and ideas from the course of normal daily conversation. In other words, language teaching should be more functional so students can make use of what they have learned. The study sought to find out what these methods are. Learning cannot only be gathered from printed matters alone, but also from other resources. The community is a rich source where teachers can get materials for their use in teaching. The resources available in the province of Iloilo which may be used in Filipino Language were also investigated.