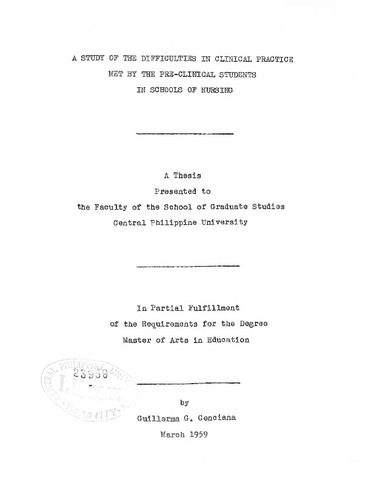 Young women entering schools of nursing today are more critical and at least have more definite ideas of what they expect from their training than the nurses of yesterday. After careful screening of nursing students entering training, instructors often ask why the student whose record shows that she is capable in classwork receives a poor rating in her clinical work. It is little short of tragic to see a young woman who begins her training with enthusiasm, idealism, and desire to give her devotion, energy, and loyalty to the relief of suffering, in the course of her training to have her hope dulled and her youthful idealism turn to disillusionment. By the time of graduation the job of caring for the sick is not a challenge but a chore; not a task to be welcomed but a job to be shirked. Again instructors ask such questions as: "Why does she want to be a nurse and not want to do the things which will make the patient comfortable?" There is a need of more understanding and thought in helping the student adjust to the school and hospital environment. There are many factors to be considered in planning for the students who are to become the future nurses. Screening of the nursing students before admission is important but this alone will not assure the preparation of nurses who are capable of giving nursing care. Everyone on the staff with whom the students come in contact, both in the hospital and in the school, can help or hinder students’ success. The present study of the difficulties met by pre-clinical students in the schools of nursing is an attempt to discover whether there are problems common among students of every school, and to make recommendations to those who, in one way or another, may profit by them. The study may help find means of gaining the solution to the problems and so improve nursing service and nursing education. Statement on the Problem The present study was initially conceived as an attempt to define the difficulties encountered by preliminary students in their clinical practice, the reason for the withdrawal of students during this period, and to find out the extent to which these problems exist in various nursing schools. It has long been the concern of the investigator to improve the conditions prevalent during the pre-clinical period, and she has selected this problem to find out the causes of failures of the beginning student to make a good adjustment early in the course of the training period. In an article in the Nursing Research Magazine, June Teig Bailey states: "Since the classroom failure has consistently been the largest single reason for withdrawals from schools of nursing, most investigators have approached the problem by studying ths extent to which the scholastic success could be predicted from various psychological test." However, in her daily contact with students, the investigator has come to feel that weaknesses in adapting to clinical work also prevail. What is the source of these difficulties? How can the students be helped and guided in overcoming such difficulties?