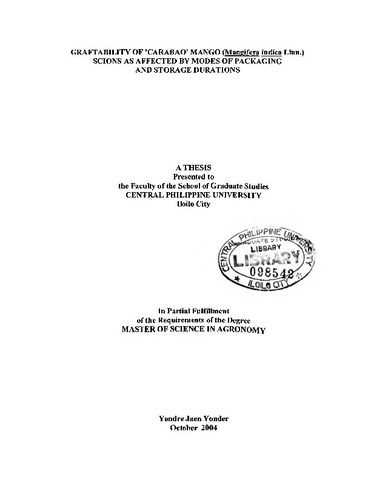 The study was conducted at the nursery of the Bureau of Plant Industry - National Mango Research and Development Center, San Miguel, Jordan, Guimaras from March to May 2003. This study aimed to determine the effect of modes of packaging and different storage durations on graftability of 'Carabao' mango scions. It also determined the interaction effect of modes of packaging and storage durations on graftability of 'Carabao' mango scions. It also measured the association between survival as manifested by bud emergence of grafted mango scions as a function of storage duration and modes of packaging on bud emergence or survival of scions. It also aimed to describe storage temperature and relative humidity on storage boxes where scions were packed at different modes and to describe agro-climatic data after grafting of scions that could affect success in grafting. Results of the study showed that graftability of 'Carabao' mango scions based on percentage viability, mortality, bud emergence and growth parameters was significantly affected by different storage durations and modes of packaging. A highly significant interaction was also observed between these two factors. Almost all data except on percentage of mortality of grafted scions observed at 25 to 50 days after grafting (DAG) and percentage of bud emergence at 5 to 20 DAG. In general, shorter durations of storage resulted in higher percentage of viability and bud emergence of grafted scions. Storage of more than 5 days resulted in a lower percentage. However, when scions were packed at 50 to 100 pieces, there was an increase in survival rate. In all instances, scions stored for 9 day regardless of modes of packaging died and only one plant survived out of the ten samples in replication 3. More vigorous grafted seedlings were achieved when grafting of stored scions was done at 1 to 5 days after collection, regardless of the modes of packaging used. When storage of scions was extended up to 7 days, more scions should be packed at 50 to 100 pieces to achieve moderately vigorous grafted seedlings. The combined linear effects of storage duration and mode of packaging contributed significantly to the variation in bud emergence of grafted scions. Almost 93 percent of the variations in bud emergence can be explained by the linear function involving storage duration and mode of packaging. Temperature and relative humidity in storage boxes had minimal variations that ranged from 28.20 to 28.37° C and 84.03 to 84.75 percent, respectively. Boxes where scions were stored for shorter duration had higher relative humidity, because evaporationx ii of moisture were still minimal. Combined effect of agro-climatic factors contributed on the success of grafted scions regardless of the different treatments used. From the results of the study, it can be concluded that scions should be grafted not more than 5 days after collection regardless of the modes of packaging used. Should grafting activity be extended up to 7 days, the number of scions should be increased from 50 to 100 pieces per pack to trap more moisture and delay drying up of scions. Wrapping materials should be moistened or properly maintain sufficient moisture and allow exchange of gasses within the scions in the storage containers.