To stay or leave the engineering track: Correlates of students' intentions 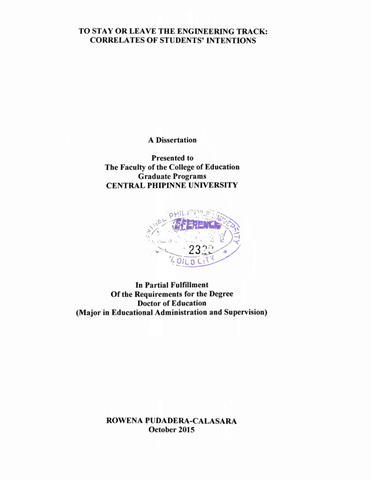 The study was conducted to determine the relationship between selected socio-demographic characteristics of engineering students and their intention to stay or leave the engineering track. Relationship between other factors such as students’ motivation and their involvement in engineering activities and between selected socio-demographic characteristics, motivation and involvement in engineering activities and students' intention to stay or leave when all other variables were controlled were also determined by the study. The 246 engineering sophomore students from three schools in Iloilo City namely, Central Philippine University, University of San Agustin (USA) and Western Visayas College of Science and Technology (WVCST) served as the study’s respondents. The study instrument was tested for reliability among fifteen (15) sophomore engineering students of a private University not included in the study. Sample respondents were selected using a combination of stratified and random sampling with a random start. A self-administered questionnaire was used to gather the data. The data were analyzed using the Statistical Package for Social Science (SPSS). Measures of central tendency like frequency was used for descriptive analysis. To determine the relationship among study variables, Chi-square, Cramer’s V, Phi and Multiple Regression Analysis were the inferential statistical tools employed. Results of the study reveal that majority of the respondents were males (65.9 percent) and from rural areas (73.6 percent) who had finished their secondary education in public schools (61.4 percent). More than half of them had fathers (54.4 percent) and mothers (69.4 percent) with non-engineering degrees. A plurality of respondents had fathers who were self-employed (42.3 percent) and mothers who had other occupations (36.6 percent). Almost a third of their families had incomes between Php10,001 and Php20,000 (32.1 percent) in a month and over a third had low grades (38.6 percent). Nearly two-thirds of the students said that they personally decided (65.9 percent) to take up engineering. Almost half of the students claimed that they personally (47.2 percent) influenced themselves to enroll in engineering. A little less than half of the students said that their main reason for taking up engineering was they wanted to get a well-paying job (48.8 percent). Majority of the students had no organizational involvement (73.2 percent) and no participation in engineering activities, while a little more than a third ( 38.2 percent) cited that they took part in any engineering activities. Study found that only a little more than half of the students expressed intention to stay (59.8 percent) in engineering while few plan to leave. Among the selected socio-demographic characteristics only father’s educational attainment, father’s occupation and mother’s occupation were found to be related to people who decided for them to take up engineering. Sex, father’s education, father’s occupation, mother’s occupation, and family income were found to be significantly related to who influenced the students to take up engineering. The main reason of the students for taking up engineering was found to be affected by the student’s academic performance. Among the personal characteristics of the students, only their academic performance was significantly related to their involvement in organization. Father’s educational attainment, mother’s educational attainment, mother’s occupation, family income and student academic categories were significantly related to the students’ participation in any engineering activities. Sex was the only personal characteristic that was significantly related to the intention of the students to stay or leave engineering. Student academic performance was the only variable found by regression analysis to be related to the intention of the students to stay or leave engineering when all other variables were controlled.

Doctor of Education major in Educational Administration and Supervision