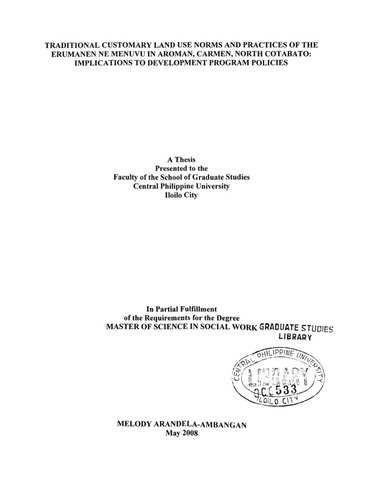 The main objective of this study is to describe the traditional customary land use norms and practices of the Erumanen ne Menuvu in Aroman, Carmen in the Province of North Cotabato. Specifically, it attempted to describe the traditional norms and practices on livelihood activities and sacred sites before the introduction of formal development programs; identify and describe interventions introduced by identified development agencies using the systems approach; describe changes in norms and practices, particularly on land use for livelihood activities and sacred sites, of the respondents; determine their perception on the effects of interventions and their extent of involvement in development program implementation; determine possible areas of concern of the social work profession and generate policy recommendations to ensure appropriateness of program design, taking into consideration the community’s traditional norms and cultural values and practices. The study was conducted in the Erumanen ne Menuvu community in Brgy. Aroman, Carmen in the Province of North Cotabato which is believed to be the heart of the Manobo civilization. This qualitative research utilized exploratory and descriptive methods using semi structured interview guides and interview schedule in data gathering. The results of this study showed that tribal norms on land use for livelihood activities and sacred sites were passed on through generations only through word-of mouth. These included norms on land ownership and utilization and resource ownership, maintenance and consumption. As to land use practices, information gathered revealed that livelihood activities ofthe tribe in the past revolved around farming and hunting, in which, both were mainly communal. Practices mentioned by respondents were bulang, penara, galas, piley, pamituen, buvur, hunting, sawit and ahani. At present, however, there have been changes in the norms and practices ofthe Erumanen ne Menuvu tribe which respondents attributed to various reasons such as implementation of alienating laws, utilization of ancestral land for other purposes, economic survival, commercialization and introduction of modem ways of farming, influx of migrants and introduction of non-indigenous religions. Of the 14 traditional practices mentioned, bulang got the highest number of respondents practicing it which totaled to 28 out of 36. It was followed by kanduli and piley with 23 and 18 respectively. Hunting got only one of the 36 respondents. Key informants attributed this very low level of hunting practice to the coming in of various development projects with required clearing of traditional hunting grounds which diminished the existence of wild animals. In this study, programs of two agencies - SCC-CEREA and DA-CEMIARC were examined using the systems approach of input, process, output and outcome. Data showed that DA-CEMIARC’S programs are focused on material assistance, technical assistance and training, while that of SCC-CEREA are on financial assistance and capability-building. Of all the meetings conducted by the two identified agencies in the community, data revealed that only 12 of the 36 respondents attended, in which, only five attended always or frequently. For the 24 who did not attend meetings, 16 reasoned that they were not informed or invited, six had no time and two were not interested. On the community’s perceived benefits from development programs, all responses revealed that they recognized that SCC-CEREA’s programs are more beneficial in terms of economic, social, cultural and political aspects. It was found out in the process of conducting this study that no professional social workers were involved in the process of implementation of development programs. With all these findings, it is recommended that there should be efforts to document and codify other traditional land use norms and practices to serve as basis for planning and implementation of future development interventions; popularize programs present in the community to build better community relations; conduct dialogue to level off concept of development and possible forms of participation of stakeholders in various processes; employment of professional social worker or community development practitioner to do CO and community relations; and researches on related topics should be conducted.