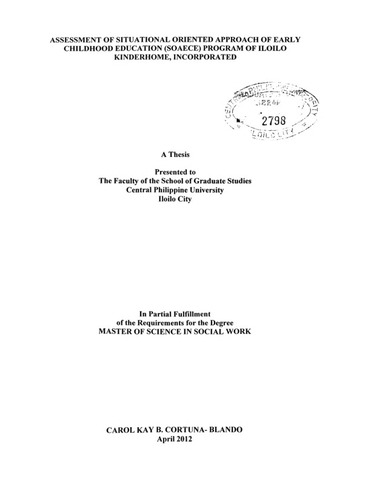 This research is a combination of qualitative and quantitative studies on assessment of the program for children specifically focusing on the assessment of SOAECE program of Iloilo Kinderhome, Incorporated in forms of scholarship assistance/education, feeding, provision of school supplies and uniform, medical-dental and hospitalization needs and livelihood for parents. Historical approach was utilized in describing the accounts of the beginning and development of Iloilo Kinderhome. Secondary data were also used in this study to get a picture of the services offered by the institution to the beneficiaries in terms of training and seminars conducted, as well as other services and resources provided. Case studies were done to highlight the impact of the program to the beneficiaries. Major findings Most of the respondents were children consistent with the SOAECE criteria and the program really catered for children’s welfare. Almost all joined the program at the age indicated in the handbook (3-6 years). The policies on recruitment and implementation have been followed with negligible shift in two cases but justified by expanded scheme indicating the foster parent’s prerogative. All respondents have availed most of the programs and services with the provision of school supplies and uniform and feeding program having the highest rating. The same programs got the highest involvement of the respondents. While only a smaller percentage failed to receive other programs, there was a significant number, almost half, who were unable to benefit from the Livelihood Program. The livelihood program was the least participated by the beneficiaries. Involvement of the respondents was consistently seen most in the implementation, evaluation and planning. Similarly, the lowest was in monitoring. Almost all of the objectives were significantly realized as perceived by the respondents. All were rated excellent, except for the participation of parents. The program has helped fulfill the needs of the beneficiaries particularly the basic needs. Its effect is lasting as those who finished schooling were employed. Respondents also got honors and awards in respective schools and various areas both in academic and extra curricular activities. One beneficiary even graduated cum laude in college. The outcome of the programs and services was manifested in many aspect of life. Physically, majority became healthy, happy and bright with new healthy lifestyle. They learned to save and became alert and ready in case of emergency in their community. Their outlook in life has become positive unlike before. Respondents became prayerful, bible readers and active members of their churches. They also became disciplined and responsible. Their parents learned to cook nutritious but economical food which even became a source of income for them. Some were able to put up their own business like tailoring, food processing, carinderia, food vending, peanut butter business, mini bakery, and home service. While there were some variations in ranking, commonalities were evident in the responses and perception of beneficiaries and administration on the facilitating and hindering factors in the implementation of the program. The facilitating ones were related to the administration, involvement of the beneficiaries and their parents and the availability of resources. This was coupled with the Christian value system/spiritual enrichment as exemplified by the management and staff. However, some of the facilitating factors were considered by other respondents as hindrances in the program implementation. Most of their responses alluded to the laxity of the staff in visiting or monitoring the beneficiaries in the communities and favoritism and conflict of interest of the staff. While the administration shared some of factors, they noted that many beneficiaries did not fully grasp the expectations of SOAECE. Their dole -out mentality hindered the program implementation. The staff also mentioned about the nature of the program. SOAECE approaches did not seem to fit in the formal educational system in the Philippines. While SOAECE was interrelated learning, the formal education system was departmentalized; hence, children have difficulty in adjustment during their primary schooling. Conclusions The SOAECE program of Iloilo Kinderhome has effectively catered to the bio psycho-social and spiritual needs of the children. Except for some problems in the implementation, its programs and service have been implemented, objectives realized as perceived by the beneficiaries. The lasting impact on the lives of the beneficiaries and their families were manifested in the improvement in their knowledge, attitude and skills, apart from the economic benefits. Indeed, SOAECE has helped in the transformation of the beneficiaries preparing them to become Responsible Adult and /Productive Citizens of the community.