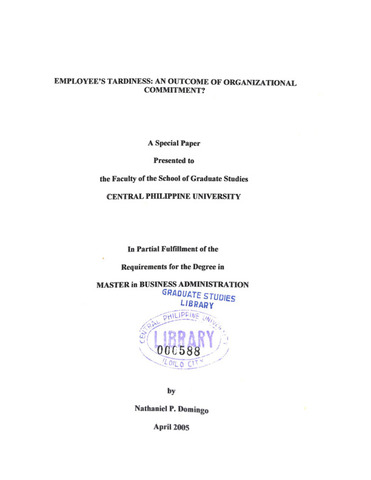 Employee’s tardiness is a phenomenon that is common in many organizations.This has been a perennial problem of many companies and has a big impact on the employee’s productivity and performance, as well as to the organization as a whole. Organizational commitment is an issue that has been investigated because of its manifested negative correlation to undesirable outcomes such as absenteeism, high sick leave (Mathieu & Zajac, 1990; Mowday, et al, 1982). Absenteeism was noted to have unfavorable effect on the performance of the business organization. This was influenced by the commitment of the employees to the organization. According to Meyer & Allen(1997), those employees who are organizationally committed represent the “heart, brain, and muscle” of the organization, and business success depends on these employees. The primary objective of this research was to determine whether there is a significant relationship between organizational commitment and tardiness among CAP employees. Data on Organizational Commitment were collected from 80 employees using the Organizational Commitment Questionnaires developed by Meyer and Allen (1997) while data on personal characteristics and tardiness were collected using the survey form. Data collected were processed and analyzed using Statistical Package for Social Science version 10.0. Findings show that most of the respondents were older employees, female, married and have dependent children. Most of the respondents were rank and file who had been in the company between 6 to 10 years. This research shows that older, male, married, and those with dependent children, rank and file, and tenured employees tend to have higher level of commitment to the organization compared to their counterparts. On the level of tardiness, older, female, single, without dependent children, rank and file and tenured employees tend to have higher level of tardiness compared to their counterparts. Finally, highly committed employees tend to have higher level of tardiness based on the result of their means score. The result of correlation using the Pearson r shows a negative correlation between all three types of organizational commitment and tardiness. This study concludes that there is no significant relationship between organizational commitment and tardiness. Tardiness, in this study, is not an outcome of organizational commitment among the employees of CAP. With these findings, the researcher recommends that CAP management must develop general policies to reduce the level of tardiness of employees. Specifically, management must clearly define job responsibilities of every employee, promote administrative effectiveness, review the policies on tardiness, and improve the reward system. These findings however are limited to this particular company in Western Visayas only. It is yet to be verified whether conclusions reached is true in the whole industry or in various types of organization. There maybe some reasons why organizationally committed employees have higher level of tardiness. Future research should include other antecedents of organizational commitment and tardiness. These includes job hazard, poor management, lack of motivation, unfavorable working conditions, conflict, autonomy, co-worker and superior support, job security, corporate social responsibility job satisfactions, etc.