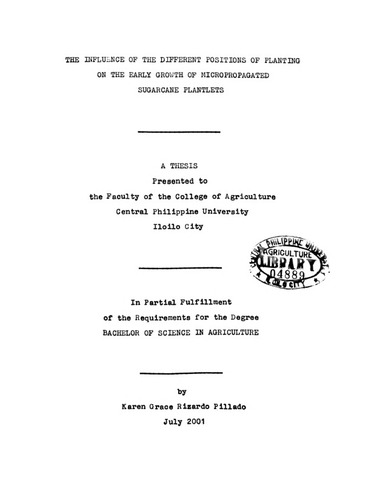 The study was conducted from August 4, 2000 to January 19, 2001 at the experimental field of the Crop Research Laboratory, College of Agriculture, Central Philippine University, Jaro, Iloilo City. The objective of the study was to determine the effect of the three planting positions of micropropagated sugarcane seedlings on the number of tillers the plant will produce, the height and diameter of the primary tillers, and the number of canepoints produced at cutback. The treatments consisting of different planting positions were laid out in a randomized complete block design and replicated three times. The different planting positions were: lying (0°), slanting (45°) and erect (90°). Hardened micropropagated sugarcane plantlets were obtained from the micropropagation laboratory, Sugar Regulatory Administration, Passi Mill District. Results of the study revealed that the number of tillers per plantlet and height of primary tillers at thirty-day interval up to 150 DAT were not significantly (P 0.05) affected by the different planting positions. However, the X2 test revealed a significant association between the position of planting and the number of tillers per plot on the 150th day. The results of the study further revealed no significant (P 0.05) difference on the mean stalk diameter of primary tillers. The results also showed that seedlings planted in a slanting position produced the most number of canepoints with 365 canepoints, whereas, the lowest was 315 cane¬ points from seedlings planted in a lying position. Statis¬ tical analysis, however, revealed no significant (P 0.05) difference on the number of canepoints produced. Visual observations revealed that the stalks produced long inter¬ nodes which could be due to the close spacing (75 cm between rows and 30 cm between hills) of the sugarcane seedlings. This resulted in seedpieces having only 2 buds when cut at 10-inch length. The results of the study suggest that growing micropropagated sugarcane seedlings either in lying, slanting or erect position will result in comparable agronomic characteristics at the early growth of sugarcane.