Experiences and responses to reduce moral distress among nurses: a qualitative study 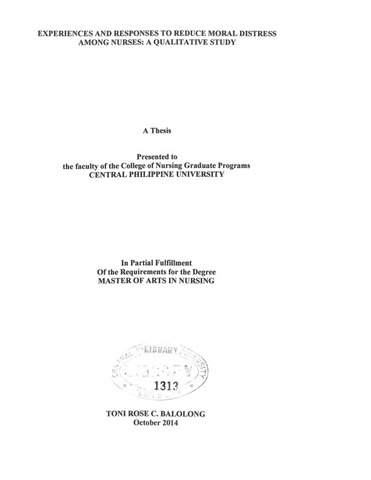 This qualitative study aimed to explore the experiences of moral distress and strategies used to reduce it among ER nurses in a district hospital in the province of Iloilo. A phenomenological approach was utilized in analyzing data taken from ten ER staff nurses identified with having experienced moderate to high extent of moral distress in their work. Data was collected through face-to-face in-depth interview using an interview guide. Five of the participants were 28 years old and below; the other five were 29 years old and above. Most of them were female, single, and all were Roman Catholic. Three of them had permanent positions, while seven were contractual. The sources of discomfort reported by the participants were: shortage of staff, lack of resources, disrespect from patient, folks, colleagues and physicians, unprofessional behavior of physicians, inadequacy of skills of some physicians, and violating regulations in order to protect patients. Three out of the ten participants had experienced physical disturbances, such as physical pain (in the form of headache), fatigue, inability to go to sleep, difficulty maintaining sleep, and even getting sick (in the form of common cold) due to moral distress. They also suffered from various emotional discomfort or disturbances such as powerlessness/helplessness, humiliation, irritation, anger, worry, regret, discomfort, feelings of hurt, annoyance, frustration, shame, anxiety, fear, feeling guilty, and feelings of ineffectiveness, desperation, and disappointment. Moreover, eight out of them also experienced psychological disturbances such as depression, apathy, and stress. Spiritually, two out of the ten participants mentioned having experienced feelings of worthlessness because of moral distress. In addition, four of the ten nurses experienced disturbances with how they work or perform their duties. These included avoidance, distancing and inability to concentrate. Each of the participants responded to their feelings of discomfort using diverse strategies. Nine of them adopted both positive and negative responses, while one of them used positive responses only. The positive responses included: discussion with those involved, reporting the matter to superiors, trying to solve the problem, sharing with colleagues, friends and family, praying and seeking forgiveness, absorbing and trying to understand, thinking positive and diverting attention. On the other hand, the negative responses were: trying to forget it, ignoring those involved and simply accepting the situation, scolding and blaming others, making excuses for those involved, keeping silent and doing nothing. The effect of the responses or strategies used when dealing with discomfort were perceived differently by the nurses, either positive or negative. The positive perceptions include: effective and moderately effective; while the negative perceptions were: ineffective and discomfort increased. Based on the findings, the following conclusions were derived: Participants experienced discomfort related to patient or nursing care irrespective of age, sex, civil status and employment status. Disrespect from patient, folks, colleagues and physicians, shortage of staff and lack of resources commonly caused discomfort among the participants. All of the participants had suffered varied emotional disturbances; majority also suffered from physical and psychological disturbances while half of them suffered from functional disturbances. Rarely did they experienced spiritual disturbance. The participants either positively or negatively responded to their experiences. Sharing with colleagues, friends and family, reporting the matter to superiors, trying to solve the problem, discussion with those involved, keeping silent, praying and simply accepting the situation were the most common responses by the participants. Sharing with colleagues, friends and family, praying, reporting the matter to superiors, trying to solve the problem, and discussion with those involved were found effective. On the other hand, ignoring those involved, simply accepting the situation, keeping silent and doing nothing, trying to forget, making excuses, scolding and blaming others were found to be ineffective. Those who positively responded to moral distress were relieved of the discomfort and were morally comforted. However, those who negatively responded experienced continued suffering and even increased discomfort. This affirms Corley's theory that the more the moral distress is not addressed or relieved, the nurse continues to suffer. This can tax the nurses' coping reserves which can eventually lead to burn-out, resignation or even leaving nursing. Those who experienced moral distress or is still experiencing moral xi distress can have negative effects on patient care and the organization itself.