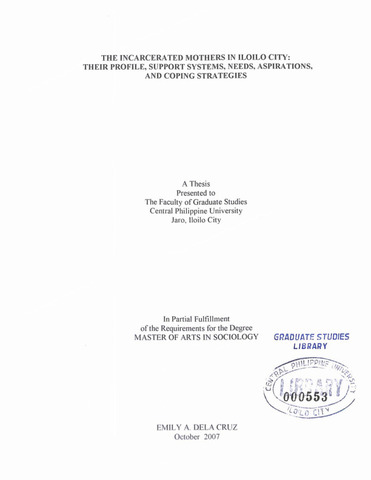 This study utilized the one-shot survey design and aimed to describe the incarcerated mothers at the Iloilo City Jail as to age, marital status, educational attainment, occupational status, occupational status of husband/ partner, number of children, reason for incarceration, length of stay in prison, and status of imprisonment. Furthermore, this endeavored to explain how mothers cope with the situation behind bars and how their characteristics, support systems, needs, and aspirations influence the coping strategies they employ during their incarceration. Fifty-one mothers constituting 94 percent of the total number of incarcerated mothers who expressed their willingness to be interviewed served as the respondents of this research. The interview was done from December 2006 to February 2007. The strategies mentioned by the mothers were later classified according to COPE scales: positive reinterpretation and growth, mental disengagement, focus on and venting of emotions, use of instrumental social support, active coping, denial, religious coping, humor, behavioral disengagement, restraint, acceptance, and planning. Most mothers were less than 45 years old. They were legally married and a number of them were separated even before their incarceration Mothers were high school educated and have more than two children They were engaged in retail activities such as selling cosmetics, rice, processed foods, and RTW prior to their incarceration. The incarcerated mothers had committed drug-related offenses. Most have stayed in prison for not more than two years while a considerable number had stayed longer. Cases of the majority of mothers were still being heard in court. Mothers had been provided material and non-material support by their families and by the correctional institution. However, community support was non-existent to an overwhelming majority of the incarcerated mothers. The incarceration of mothers had brought a great economic problem to their families that resorted to the mothers’ intense need for money to be extended to their children. The uncertainty of how their children live their lives strengthened the incarcerated mothers’ desire to be reunited with them. To survive the prison life, mothers had employed mental disengagement, venting of emotions, and religious coping strategies. The mothers’ length of stay in prison is associated with the support extended to them by their families. The longer the stay of mothers in prison the less support they receive from their families. The reason for incarceration has a significant influence on the needs of the mothers in prison. Mothers who are detained for drug-related offenses had more economic needs compared to mothers whose offenses were not related to drugs. The aspiration of the incarcerated mothers is influenced by her age. As incarcerated mothers grow old, their aspirations shift from family-focused to self-focused aspirations. The coping strategies employed by the incarcerated mothers vary with age. As mothers become older, they tend to use a more passive form of coping like mental disengagement and religious coping. Government and non-government organizations as well as people’s organizations who have the responsibility of looking into the welfare of the incarcerated mothers and their families are recommended to extend livelihood programs to the families of the mothers. It is recommended that the institution and other concerned organizations help maintain if not restore relationships through a more flexible visitation programs and intensive counseling both to the incarcerated mothers and their families. It is also recommended that activities aimed for personal satisfaction, such as reading materials and board games, be extended to them that will enable them to pass the time allows for distraction. A speedy processing of the cases is recommended to the Department of Justice. This could prevent the long wait of both the mother and the children to be reunited.