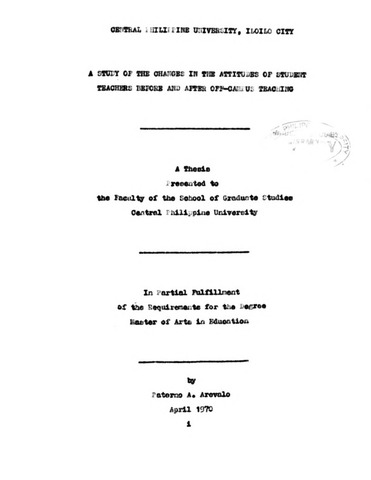 This study was primarily concerned with changes in the attitudes of student teachers caused by experiences met during off-campus teaching. More specifically, the study aimed to answer the following questions: 1. Is there a changed in the attitudes of student teachers as a result of off-campus teaching? 2. What is the direction of the change, if any, in the attitudes of student teachers toward children and schoolwork after the off-campus teaching? The main subjects of this study were 248 senior B.S.E.Ed. students(thirty-five males and two hundred thirteen females) who were enrolled in the internship course during the first semester of the school year 1969-1970. These students were studying in the four institutions found in the City of Iloilo; namely, Central Philippine University, University of Iloilo, University of San Agustin, and West Visayas State College. This was a normative survey study, using the Minnesota Teacher Attitude Inventory by W. W. Cook, et al. as its principal instrument. As an integral part of the investigation, a checklist was used as supplementary technique to help obtain additional information on the objectives of the investigation. The Inventory was administered before students teachers left for their off-campus teaching and upon their return. The student teachers were asked to furnish the investigator the necessary information in the checklist the final administration of the instrument. Statistical formulas were used as tools to aid analysis of data. Computations were made for the mean, the standard deviation the standard error of the mean, the difference between means, the correlation between the initial and final tests, the standard error of the difference between correlated scores, the z-ratio and the analysis of variance. In the analysis and classification of the 150-item, attitude statements of the Minnesota Teacher Attitude Inventory, there is an observed change in both groups, the mean difference between the initial and final administration for the Inventory being significant at the 1 per cent significance level. B.S.E.—Major in Elementary Education is the term used in the West Visayas State College. In general, the direction of change was toward improvement—a negligible number of items which were answered unfavorable at first administration and answered favorable at second administration of the Inventory. The data obtained in the checklist revealed that there seems to be a variety of experiences for student teachers. The most common beings: (a) acted as substitute in the absence of teachers in the cooperating school where student teachers were assigned, (b) handled the regular teacher's load, (c) attended and did classroom demonstration teaching, and (d) attended teacher's meetings. On the other hand, experience of cooperating teachers seems to be independent of change, as shown by the fact that the mean differences tested by analysis of variance was not significant at the 1 per cent level; whereas, the educational qualification of cooperating teachers was associated with change, as shown by the fact that the mean difference tested by analysis of variance was significant at 1 per cent significance level. The observed changes during the internship period seem to be definite as confirmed by the fact that the mean difference was significant at the 1 per cent significance level. On the bases of the above findings, the investigator recommends that: 1. Off-campus teaching should be continued. This had shown definitely that favorable changes in attitudes of student teachers took place as a result of the program. 2. Since the number of years of experience of cooperating teachers is not associated with the amount of change in attitudes of student teachers, this criterion for the selection of cooperating teachers should probably not be given as much weight as it is in Circular No. 4, s. 1965. This recommendation is given with cognizance of the fact that beginning teachers have problems of adjustment and should not be given additional burden of guiding student teachers. 3. Academic preparation which is higher than what has been set by the Bureau of Public Schools should be considered in the choice of cooperating teachers which may include courses on supervision of student teachers and other subjects leading to the Master of Arts degree. In addition, the study has pointed to the need for further investigation, such as (a) studies to discover the competencies that must be possessed by an effective cooperating teacher, and (b) a study to determine what types of experiences are most conducive to the growth and improvement of student teachers.

Arevalo, P. A. (1970). A study of the changes in the attitudes of student teachers before and after off-campus teaching (Unpublished Master's thesis). Central Philippine University, Jaro, Iloilo City.